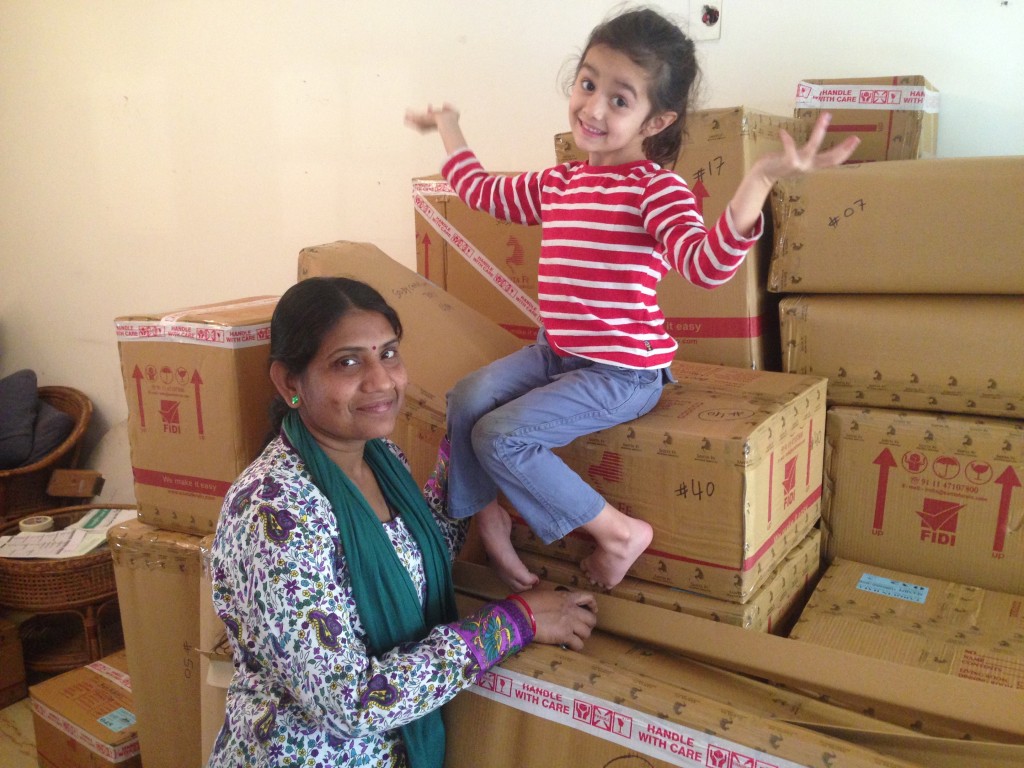 A whole life, in boxes.

WOW! So what a crazy, life-altering three years it’s been! I feel I’ve morphed professionally and personally not once, but multiple times.

To our great heartbreak, my family and I were forced by circumstance to leave India in February 2016. Delhi’s epic pollution was only getting worse. My husband and I could not justify exposing our children’s forming lungs to such toxic miasma. The costs of cleaning the air in our flat was adding to the pressures of life. We had no corporation bankrolling us; no free family property to live in. And with a second child entering education in a city where 5 children fight for every single school place – we were facing the burden of more private fees.

In other words, we couldn’t afford Delhi anymore, financially or in terms of our health.

Almost a year of anguished debate followed. If we left, where on earth would we go? The itinerant writer, his freelance broadcaster wife and their two kids: no savings, no family support? The idea of cramming back into our squished London house under perpetually leaden skies in an area with so many unfamiliar social faultlines… is not what we dreamed of.

We could’ve gone to beautiful America … to upstate New York… beside the Hudson River. It was a beguiling thought. I’d go back to my childhood home country…We could enjoy a brilliant quality of life near grandparents, aunts, uncles, siblings, cousins, childhood friends…

Just then sadly, a loud, orange-headed figure took over the airwaves, spewing the kind of ignorance and hate I’d actually never seen in the America of my childhood. Donald Trump’s appearance felt like a portent. That and the reality of starting afresh in a place I no longer even had a bank account… we abandoned the America plan with sadness.

Finally, one morning in Delhi, Tarquin and I sat talking – the crows loudly making their protests heard outside our window.

“Why don’t we go to Bath for year? It would be a new adventure and if it doesn’t work out, we can think again…” he ventured.

He was referring to Bath, Somerset, in the UK (not Bath, NC, USA – which is also very delightful!) Soon, I was on a flight back to visit, apply for jobs at the BBC and spend several days walking around the UNESCO World Heritage City of Bath, home to Roman ruins, medieval churches and Georgian splendour, not to mention a beautiful river, hills, universities and stunning countryside all around.

Clean air and Georgian splendour in a small, friendly city, Quite a contrast to Delhi!

Two factors cemented our plan to move here. First was the delightful primary school in the centre of town: St Andrews. The deputy head teacher who showed me around extended such genuine empathy on the first meeting – so uncharacteristic of England – that I felt immediately welcome. And the school demonstrated a passionate commitment to creativity, free-thinking and inclusion. Sold.

Second was the tangible friendliness of Bath residents. Everywhere I went: shops, public spaces, the library… people of all stripes freely laughed and spoke with me. How is that remarkable? If you’ve ever attempted integration as an outsider in Britain, you’ll know just how rare and precious a thing familiarity and friendliness are.

Back in Delhi, I told my dear domestic sisters – Kavita and Radhika – the news. There were more tears and hugs than I care to remember. Those goodbyes are seared into my soul. I spent days walking around perpetually in tears despite the awful smog, so utterly bereft at leaving the one place we as a family chose freely and loved so fiercely. 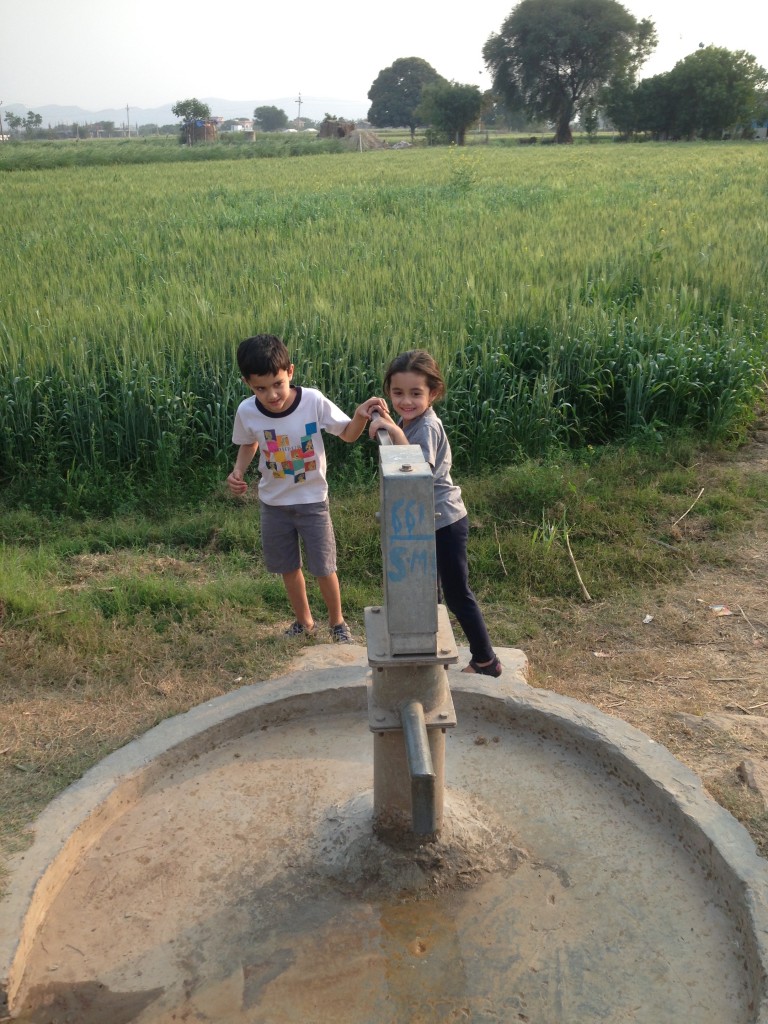 A few short weeks later, propelled by the deadline of accepting school places, we left Delhi. On the way to the airport, Malini, then just 4, clung to her babysitter Nitu. I couldn’t stop crying as I watched them together, knowing their intimate, loving time together was now at an end.

Such is the privilege and the tragedy of being what Pico Iyer calls the ‘global soul’. You exist fully in separate, distinct worlds. Inevitably, you leave one for another. And you spend most of your spiritual life trying to unite those disparate worlds into a coherent tapestry.

I’m not sure how to combine Bath and Delhi. They are so distinct and unrelated. Oh, and of course there is my beloved childhood home of North Carolina too.

A small sign perhaps: the other day in the supermarket parking lot, a woman I’d never seen before stopped me and, pointing at my college sweatshirt said: “Are you from North Carolina?” I’ve never been asked that before in England, so naturally I stopped to chat.

It turns out she herself is a Tar Heel … who now lives in Bath… and is married to an Indian. So there you go, at least I’m not alone in trying to weave my worlds together!

View all posts by Anu Anand →

An open letter to all you ABCD Modi-maniacs out thereMy parents voted for Barack Obama, presumably because like so many immigrants in America, they see the Democrats as more inclusive than the Christian-right-dominated, overwhelmingly white Republican Party. […]
01 October 2014

It's raining mulberries & squiggly seed pods...
Seed pods of Acacia Nilotica Before the scorching summer sun consumes us entirely, I wanted to dwell on the delights of the last few temperate weeks of Indian weather. In our […]
May 07, 2014

Back to full time work
Whose desk is this anyway? ©Sacred Cow Media Ltd.     If only the kids could be put to work!! Sadly no. They can usually be found mucking about at my desk, either […]
Mon, Mar 03, 2014

The Ultimate Guide to Indian Rooftop Gardening
My New Year has begun in a new flat - one that is considerably free of electrical fires and deranged landlords! And with Delhi's blissful winter days upon us, I've […]
Jan 02, 2014

The mother of all jasmines
After my Indian wedding, once the elephant-led procession was over, and the vows completed around the sacred fire on a chilly December night in the desert... my new husband and […]
Sep 27, 2013

Gifts only a gardener could love...
A pair of used, heavy-duty gardening gloves and three terracotta composters... apart from the Monsoon, which has kicked off here in Delhi with a deluge that flooded our office and […]
Jul 10, 2013

Hey India, you didn't build that!
If I had to analyze why -- despite its ancient culture, knowledge, enterprise and natural resources --  India remains home to more poverty and deprivation than sub-saharan Africa... here's what […]
May 06, 2013

Anu Anand is a freelance multi-media reporter based in New Delhi, India. For 18 years, she's covered the international news for the BBC as a presenter and reporter.